An interview with Kendra Chritz 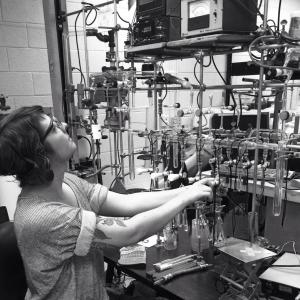 What does your job involve?

I use geochemistry to study how environments have changed over time. I use a diverse array of biological and geological material to do this – museum collections, tree rings, fossil soils, lake sediments, etc.

How did you get to this job (education etc.)?

I have a very traditional scientific background. I have always been drawn to science, even as a young kid. I completed my undergraduate degree at the University of Portland with a major in Biology and a minor in Chemistry. Perhaps my most formative experience in my career trajectory was doing an undergraduate research project on giant deer at the Natural History Museum of Ireland. I was exposed to paleoecology and stable isotopes through that project, and I’ve been totally hooked ever since. My alma mater didn’t really have coursework or research that would prepare me for that particular kind of research career, so I figured out what I needed to do and made my own way. I wrote my first academic paper in stable isotope paleoecology as an undergrad, and executed an independent chemistry research project that would help me achieve my goal.

I went immediately from undergrad into a Ph.D. program at University of Utah, and when I say immediately, I mean it – I was on a plane to take a short course in Kenya with my Ph.D. advisor five days after I graduated from undergrad. That was when I was exposed to East African prehistory and got to explore the collections in the National Museums of Kenya, and I designed the project that would become my dissertation during that first trip to Kenya. I went back to East Africa five more times during my Ph.D., in addition to functioning as lab manager and lab technician for the stable isotope lab I worked in. At the time, it was a lot to juggle, but I am so grateful for the preparation it gave me for becoming an independent scientist.

I’m just wrapping up my first postdoc on radiocarbon in tree rings as a tracer for historic fossil fuel emissions in cities, and I’m about to start another postdoc at the Smithsonian Institution.

Do you feel being LGBT has affected your career decisions?

Not really. My career path has been guided almost exclusively by my passion for paleoecology and geochemistry. Being a part of the LGBTQ+ community is just a part of who I am, and thus something I bring to the field.

Have you had any reactions from colleagues about being LGBT, either good or bad?

Both, to be honest. One of the hardest things about being bisexual is that your identity tends to be invisible, and it takes extra effort on your part to be out and visible. Sometimes, that results in inappropriate questions or being asked to “prove” that you’re part of the queer community. That has especially been an issue when it comes to my desire to participate in queer STEM groups – people decide how they choose to see your identity (as either gay or straight), and then you have to convince them otherwise. A huge part of that problem has to do with the fact that so few bisexual people are out and visible, which is why I do my part to be very visible as an out bi/queer person in my field.

Did you have any role models growing up (LGBT, STEM, totally unrelated…)?

I remember watching Contact as a kid and becoming obsessed with Jodie Foster’s portrayal of Dr. Eleanor Arroway. I wanted to become a smart, feisty, brilliant, driven female scientist who persists despite enormous opposition. I also read Jane Goodall’s memoir My Life with the Chimpanzeesfor a book report in middle school, which was very controversial at my conservative Christian school because of its support of evolution. I guess I have always been drawn to depictions of smart, powerful, adventurous women scientists who overcame great challenges in their career, and I hope I can be that same kind of mentor some day.

What are your plans for the future?

I would like to become a professor at a large research university or museum.

Science is still somewhat socially conservative, and that tends to extend to LGBTQ+ scientific support groups. My past experience with trying to become more involved in these groups has been less than positive because I don’t identify as gay. It is exhausting to continuously have to prove that you belong. People also think that you’re somehow over-sharing when you come out to them as bisexual, which stems from unfair assumptions that bisexuality is somehow conflated with promiscuity, or that bisexuality is fake, or that bisexual people are somehow cashing in on straight privilege because we are attracted to the opposite sex. The reality as that we experience rejection and prejudice from BOTH our gay and straight counterparts. So, if we’re slow to join into LGBTQ+ STEM events, remember that we often have to work through the difficulties of our past experiences to participate in these groups. Be mindful of this and be extra welcoming.We want to be known and we want our voices to be heard.

An interview with Struan Bourke

THE CONTINUING STIGMA OF HEPATITIS C

Europe’s first transgender road crossing has been unveiled in Holland

A gay man who escaped persecution in Syria